Since the Oceanside Harbor was created back in the 1960’s, it has been a beautiful recreational area for Oceanside residents and visitors alike.  The quaint shops, restaurants with tasty food, and water based activities for everyone to enjoy has made the harbor one of Oceanside’s crown jewels.  But for the last fifty years, the harbor has lacked accessible and readily available recycling and trash containers. 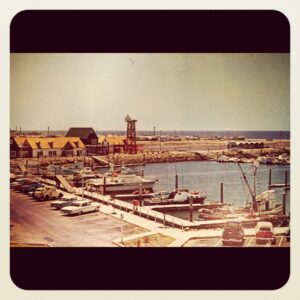 Both the North and South Marina have visitors on a daily basis, but there is more foot traffic in the South Marina.  Yet there aren’t visible recycling receptacles along the most heavily walked paths.  Trash and recyclable materials end up on the ground and eventually make their way into the water.  The wind and tide force these materials into the southeast corner of the harbor.  This is directly below the Crab Shack, Tackle Shop, and restaurants.  As one of the busiest pedestrian areas in the harbor, trash and recyclable bottles should not be left rotting in between rocks and floating in the water.  It has been an eyesore for years which the City of Oceanside ignored, until now.
After thirty years of looking at this problem and waiting for the local harbor management to take care of the eyesore, Captain Joe stood up and took action.  He photographed the trash in the water, in between the rocks, and sent them to all of Oceanside’s City Council members.  This was the first step in a long line of small actions made by Captain Joe.  Ultimately, the H2O Patrol was hired on a contractual basis to remove debris from the harbor.  These fine folks do a fantastic job and truly care about the health of the harbor.  While on their standup paddle boards, they patrol the harbor and pick up floating debris, take trash out of the rocks, and then properly dispose of it.

Captain Joe couldn’t stop there because he saw a need for better recycling in the harbor.  Colleen Foster, a management analyst for the City of Oceanside’s Solid Waste and Recycling division, asked for letters of support for a NOAA Grant to prevent, assess, and remove marine debris.  He, along with other prominent harbor advocates, wrote supporting letters for the grant application.  After winning the NOAA Grant, new highly visible and accessible recycling and landfill containers were installed along the busiest pedestrian walkways.

The Oceanside Harbor now looks healthy and well taken care of for all residents, visitors, and animals who enjoy its beauty.  However, Captain Joe doesn’t want to stop here.  He knows there are more issues threatening the harbor’s livelihood.  First, we want to install a monofilament recycling area along the sportfishing docks.  Fishing line can be deadly for animals, and many fishermen are unaware their line can be recycled.  By installing a prominent monofilament recycling container with adequate space and routine pick ups, we can help recycle hundreds of miles of fishing line which would normally make its way into the Pacific Ocean. 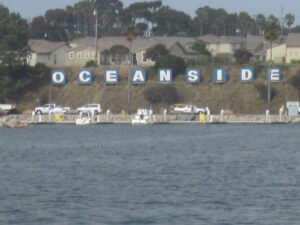 This is only one of Captain Joe’s many ideas to improve the health and sustainability of the Oceanside Harbor.  If you know of any ideas, share them with us on our blog, Facebook, or Twitter.  Captain Joe and the entire Sea Star crew practice sustainable fishing, properly dispose of trash, and recycle as often as they can.  Join the Sea Star movement to better protect our ocean’s health!