A recent court ruling in the International Court of Justice states Japan’s whaling operations have not been for research as the country claims.  Whales such as minke, finback, and other endangered species have been killed for “scientific research” – which is a highly disputed claim in environmental circles.  Various wildlife protection groups have advocated for Japan to stop taking whales and selling the meat to local schools. 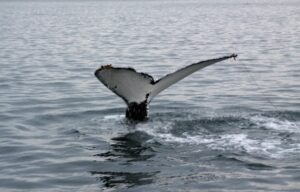 The Australian government sued Japan in 2010 on ethical grounds, and they celebrated their victory along with environmentalists.  Currently, the court ordered Japan to grant no further permits for its current Antarctic program.  They have the option to redesign their operations so it is truly scientific, or the program can cease and whales will no longer be threatened by Japanese flag vessels.

In Oceanside, California, we see various species of whales during our Sea Life Adventures.  It is common during the summer to see blue, finback, and minke whales.  These gentle giants inhabit the warm water off the southern California coast and feed on krill and small bait fish.  During the winter, we often view California Gray Whales as they migrate pass our harbor.  It is a rare opportunity to listen to the world’s largest animal exhale, producing a stream of mist ten or fifteen feet off the ocean’s surface, and then listen to the powerful lungs prepare for a deep dive by inhaling a huge quantity of air.

Fortunately for the whales and the Southern Ocean ecosystem, Japan will not be able to issue permits allowing for any whale takings this year – for research or other purposes.

« Pelicans – A nuisance or not?
The Sea Star is in Dry Dock »